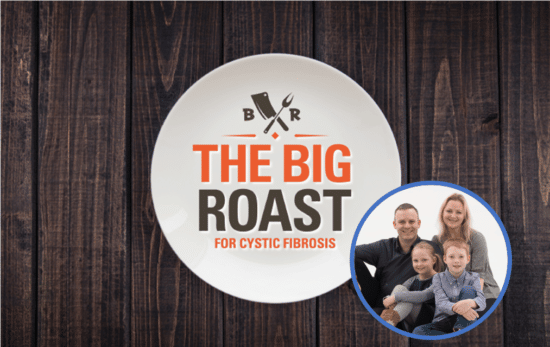 This year Rob Dolan Wines was very proud to host an event called The Big Roast for Cystic Fibrosis. The event began with the connection between Kirsty Bowness and Rob Dolan’s wife Jude Dolan who is a teacher at a local Yarra Valley primary school. Kirsty wanted to reach out to Jude regarding a fundraising campaign she runs every year with husband Stephen, called The Big Roast for Cystic Fibrosis. It is run for their two children Liam and Grace, who both have cystic fibrosis. The idea came to Kirsty when her daughter Grace referred to cystic fibrosis as ’65 Roasters’ at the age of four. Kirsty and husband Stephen have worked hard each year to raise money for The Royal Children’s Hospital Cystic Fibrosis Research Trust. Inspired by their story the team and I were eager to get involved in any way we could.

The obvious choice was to host our very own Big Roast for this local family of Healesville. As the name implies, I wanted the roast to be big and thought the Rob Dolan cellar was the perfect place to hold a big event. Next thing and the obvious choice was to get The Farm Yarra Valley on board, they have excellent staff and some amazing chefs. They were as eager as us to get involved and we settled on July 30 to host a big roast for CF.

The team and I wanted to create a day the Bowness family would be proud of and happy that we were involved. I started reaching out to the local businesses to donate towards a raffle we would host on the day to help us raise money. I received an overwhelming response from everyone wanting to donate and be involved. The very first donation received was from Picture this Ballooning, who generously donated a hot air balloon flight for two that included a champagne breakfast.

The event was growing and we were lucky enough to have live music, styled tables and a guest speaker! Blue Ridge Road preformed for us throughout the day. Melissa who is the founder of Vagary Creative was thrilled to style the event. We also felt very honoured to have Sarath Ranganathan who is Director of Respiratory & Sleep Medicine at The Royal Children’s Hospital, Head of Respiratory Diseases Research Group at Murdoch Children’s Research Institute and Principal Fellow Department of Paediatrics at University of Melbourne speak for us on the day.

The Big Roast at Rob Dolan Wines was able to raise an incredible amount of $10,316.70. I was thankful for Rob Dolan for being the MC on the day, and also allowing me to spend a lot of paid working hours planning the event. Rob’s donations of wine to every guest was also very generous and made me proud to be an employee at Rob Dolan Wines.